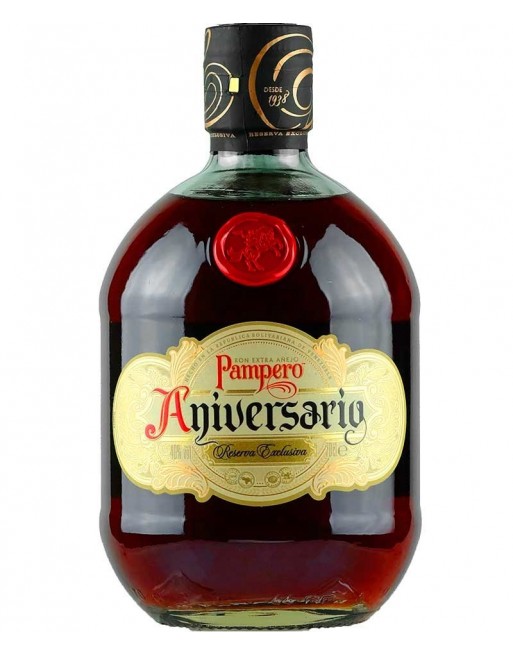 Pampero Aniversario Rum went on the market in 1963, as an exceptional rum, to commemorate the 25th anniversary of Industrias Pampero.

Industrias Pampero was founded in Venezuela in 1938, known there as the "caballito frenao" for its logo, it was the first rum to obtain the category of añejo in that country.

Notify me when available
International: We ship all over Europe, contact us for shipping costs or any further information required.

Returns: You can return your purchases with a simple call or email, whether the wine is not in perfect condition or if you simply change your mind about your purchase.

Commitment : In En Copa de Balón, we want all our customers to be so happy that they recommend us to their contacts.
Customer Service live chat: In our chat, we solve your doubts, you can make all the queries you want, both about the use of the page and about our products

Contact: If you want to send us an inquiry by e-mail, you can fill out the contact form and we will respond quickly.

Pampero Aniversario Rum was born to commemorate the 25 year anniversary of Pampero rum.

It is made with alcohol aged three times faster than in other parts of the world because the water comes from a spring in the Andes. This rum aged for 4 years in oak barrels, is considered one of the best aged in the world.

Consumption Recommendation
Pampero Aniversario Rum is recommended to take only with ice.

Buying Pampero Aniversario Rum in En Copa de Balón is easy, convenient, and with the guarantee to get the best rum at the best price, and in perfect condition.

Check out these similar selection